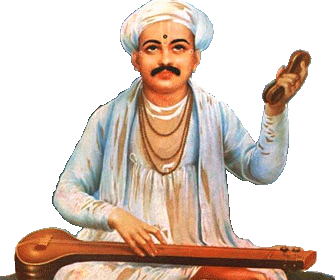 Sant Tukaram was a prominent Varkari Sant and spiritual poet of the Bhakti. He is often referred to with an honorific, Sant Tukaram. Tukaram was a devotee of Vitthala or Vithoba, a form of God Vishnu.

Tukaram was born and lived most of his life in Dehu, a town close to Pune in Maharashtra, India. Kumar, Munshi, Kincaid and Parasanisa, consider him to be of the Kunbi Maratha or agricultural tillage caste or vaani. In accordance with an Indian tradition, Tukaram's family name is rarely used in identifying him. His real name is Tukaram Bolhoba Aambile. Rather, in accord with another tradition in India of assigning the epithet "sant" to persons regarded as thoroughly saintly, Tukaram is commonly known in Maharashtra as Sant Tukaram. He is known as Bhakta Tukaram to southern Indian people.

Scholars assign various birth years to Tukaram: 1602, 1608, 1618 and 1639. The year of Tukaram's departure 1650 is much more certain. Tukaram is said to have departed to God Vishnu's supreme abode Vaikuntha with his own body in front of the gathering masses who all witnessed this event with their own eyes.

Tukaram's first wife, Rakhumabai, died in 1602 in her early youth. Sant Tukaram and his second wife, Jijabai (also known as Avali), had three sons: Santu or Mahadev, Vithoba, and Narayan.

Dilip Purushottam Chitre, a well known Marathi Scholar, identifies Tukaram as the first modern poet of Marathi. Chitre believes that Tukaram was the successor to Dnyaneshwar who denied caste hierarchy in Hindu religion and attacked rituals present in Hinduism. Tukaram has attacked almost every form of myth existing in Hindu society during his time. He opposed the existing system of Vedas supported chaturvarna.

Tukaram was a devotee of Vitthala or Vithoba, a form of God Vishnu.

Tukaram is considered to be the climactic point of the Varkaree tradition, which is thought to have begun in Maharashtra with Namdev. Dnyaneshwar, Janabai, Eknath, and Tukaram are revered especially in the Varkaree Dharma in Maharashtra. Most information about the lives of the above saints of Maharashtra comes from the works Bhakti-Wijay and Bhakti-Leelamrut of Mahipati. Mahipati was born 65 years after the death of Tukaram, (Tukaram having died 50 years, 300 years, and 353 years after the deaths of Ekanath, Namdev, and Dnyaneshwar, respectively.) Thus, Mahipati undoubtedly based his life sketches of all the above "sants" primarily on hearsay.

In 1936, V. Damle and S. Fattelal made a film title Sant Tukaram under the Prabhat Film Company, starring Vishnupant Pagnis as the lead, and released on December 12, 1936 at the Central Cinema in Mumbai. The film was a big hit, and broke all previous records by running continuously for 57 weeks. It also had won an award at the 5th Venice International Film Festival in 1937, and still remains a part of film appreciation courses. It is preserved at the National Film Archive of India.

More recently, in 2012, a Marathi language film titled "Sant Tukaram" has been released.

The story of Tukaram was also made in Telugu as Bhakta Tukaram in 1973 by Anjali Pictures. Akkineni Nageswara Rao played the title role with great devotion. The Telugu film features melodious songs sung by Ghantasala among others, and music by Adinarayana Rao. Madhusudana Rao has provided exemplary direction and versatile actor Akkineni Nageswara Rao has given one of the best acting performances of his career. Well known Telugu actress Anjali Devi plays the role of Tukaram's second wife Jijabai in this film and is also the film's producer. The songs in this movie fill one's heart with devotion and are melodious to the ears even to this day, so much so that one wants to hear them again and again.

Dr. Raj Kumar played the role of 'Santa Tukarama' in the Kannada language.

All the films that have been made thus far on Tukaram's life have been excellent, and very moving. They feature many of the miracles observed by the people of Dehu village involving Sant Tukaram, who had Lord Panduranga Vitthal's name on his lips all the time. These miracles show God's love for, and support to His devotees who chant His name without selfishness day and night. Tukaram believed that one should chant God's name (Panduranga Vitthal) with love, and not for earning something in exchange for the chant. He urged people to look beyond the transience of worldly affairs, and realize that it is only the unselfish chant of God's name that delivers a person from the misery and suffering of this earthly existence. Tukaram himself realized this after his mother, wife and son passed away and he experienced one suffering after another. When Tukaram became disgusted after all this, God appeared in his dream and suggested that his suffering would end if he chants God's name with love. After this incident, Tukaram began chanting God'a name and singing poems called "abhangs", which are loaded with meaning and messages about love for God and the transience of worldly affairs. These messages are conveyed by all the films mentioned above very well, and one gets emotional after seeing any of the above films. The essence of Tukaram's abhangs have also been captured well enough in the music of all the films about Tukaram that have been made to date.

Mahipati received one night in his dream a command from the departed spirit of Sant Tukaram to write the life stories of past prominent religious figures in Maharashtra. Accordingly, Mahipati put together his biographical book Bhaktavijaya in Marathi. Mahipati wrote two books titled Bhaktivijay and Bhakti-Leelamrut, whatever information about the life of Tukaram is known today is mostly from works of Mahipati.

Dilip Chitre (18 September 1938 - 10 December 2009) has translated writings of Sant Tukaram into English in the book titled Says Tuka for which he was awarded the Sahitya Akademi award in 1994. Says Tuka was later translated into other languages.